Thanks to Meryn I came across a most interesting piece of information. According to the Spiegel (the leading German magazine) wind turbines in Europe do nothing for emissions-reduction goals.

Despite the billions spent every year in wind energy, solar and similar renewable energy sources, greenhouse gases emissions haven’t decreased. What looks like a strong contradiction can be easily explained.

According to the international edition of the Spiegel:

Despite Europe’s boom in solar and wind energy, CO2 emissions haven’t been reduced by even a single gram. Now, even the Green Party is taking a new look at the issue — as shown in e-mails obtained by SPIEGEL ONLINE.

Germany’s renewable energy companies are a tremendous success story. Roughly 15 percent of the country’s electricity comes from solar, wind or biomass facilities, almost 250,000 jobs have been created and the net worth of the business is €35 billion per year.

But there’s a catch: The climate hasn’t in fact profited from these developments. As astonishing as it may sound, the new wind turbines and solar cells haven’t prohibited the emission of even a single gram of CO2.

Even more surprising, the European Union’s own climate change policies, touted as the most progressive in the world, are to blame. The EU-wide emissions trading system determines the total amount of CO2 that can be emitted by power companies and industries. And this amount doesn’t change — no matter how many wind turbines are erected.

Experts have known about this situation for some time, but it still isn’t widely known to the public. Even Germany’s government officials mention it only under their breath. No one wants to discuss the political ramifications.

It’s a sensitive subject: Germany is recognized worldwide as a leader in all things related to renewable energy. The environmental energy sector doesn’t want this image to be tarnished. Under no circumstances does Berlin want the Renewable Energy Law (EEG) — which mandates the prices at which energy companies have to buy green power — to fall into disrepute.

At the same time, big energy companies have an interest in maintaining the status quo. As a result, no one is pushing for change. Everyone involved is remaining silent.

Building Renovations Are Better than Windmills

Experts from the Green Party are taking the problem very seriously: “We are in a veritable crisis situation, and that means we must reconsider and alter things we once took for granted,” writes one contributor, adding that it’s important to re-examine “whether we have set the right priorities.”

Another expert begins his e-mail with a general clarification: “Dear People, I’m not fundamentally against the EEG. I only emphasize this because Manfred has repeatedly and erroneously described me as an opponent of the EEG.” But here comes the big “but”: “When reduction of CO2 emissions is more cheaply achieved through insulating a building than using a wind turbine, that is where we should concentrate our support.” When it comes to climate change, everything else is secondary to reducing CO2 emissions. 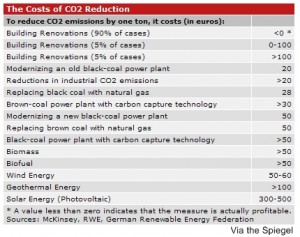 Indeed, when it comes to climate change, investments in wind and solar energy are not very efficient. Preventing one ton of CO2 emissions requires a relatively large amount of money. Other measures, especially building renovations, cost much less — and have the same effect. (…)

This doesn’t mean that renewables are bad or that we shouldn’t work more on them. No, it just means that they do not represent the panacea many people believe they are. This is clearly seen in the table above.

As I stated previously energy efficiency and conservation are the panacea to our energy and climate problems. They indeed represent the perfect solutions as they can be applied everywhere in our daily lives and have to potential to save huge amounts of money.

Edit : If you liked this article and use Digg, please digg this story there. Thanks in advance !

Edouard is a sustainability and energy professional committed to bringing our societies to a carbon neutral future. He has been writing on related topics on this very blog since 2007.