This is the question asked last week in a most interesting article on The Oil Drum. One of their contributors, Praveen Ghanta, compiled the oil production data provided by the BP statistical review country by country.

The conclusion is that out of 54 oil producing countries, only 14 of them haven’t peaked already. The author thus notes that “the era of cheap oil is definitively over.”

The full table with all 54 countries is available on the original article. For the purpose of this post I did my own table representing the top 15.

Here is the table: 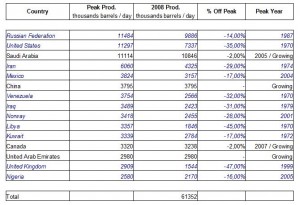 Here are some explanations:

I sorted the countries by their top daily production, expressed in thousands barrels per day.

Only three countries produced at some point more than 11 millions barrels per day: Russia, the United States and Saudi Arabia. Out of these, two saw their production peak in the 1970s or 1980s.

Out of these countries representing more than 70 percent of the global oil production, 11 of them saw their production peak. Six of them peaked as early as the 1970s ; only one in the 1980s ; another one in the 1990s and the last three peaked in the 2000s.

So yes, the cheap oil era is definitively over as production is most likely to peak very soon – as a matter of fact, it may already have peaked as we have seen in a previous post.

When the International Energy Agency states that the oil demand is likely to grow to 106 millions barrels per day by 2030 one does understand that we have to seriously push for energy efficiency and alternatives to find the additional 20 million barrels per day we would need by then.

There won’t be oil for everybody, it’s high time our governments acknowledge this. America alone could save millions barrels per day by increasing mileage requirements and pushing public transportation. Europe, China and all the other major oil consumers could do the same.

This would be fantastic as it would hit two birds with one stone. Indeed, another benefit of this would be climate change mitigation…

Edouard is a sustainability and energy professional committed to bringing our societies to a carbon neutral future. He has been writing on related topics on this very blog since 2007.